Police Use of Force

Use of Force Data:

Police officers have numerous interactions with their communities every day. The interaction types vary greatly and can range from helping someone change a car tire, to arresting a violent criminal. The Beaverton Police Department expects its officers to protect with courage, serve with compassion, and lead with integrity during all interactions. We know our community also expects us to perform to this standard.

Unfortunately, some interactions can lead to a use of force or a force incident. Unlawful and/or poor applications of force by police officers across the country has led to the corrosion of the relationship between officers and the communities they serve. Transparency is necessary to help mend these relationships.

The Beaverton Police Department is dedicated to training its officers to apply objectively reasonable force consistent with the standard outlined by the United States Supreme Court in Graham v. Connor [490 U.S. 386 (1989)]. You can find our department’s full use of force policy and quarterly use of force statistics below.

Use of Force Incident Defined:

A force incident is any incident where and officer applies force to a subject. A force incident can involve one or more officers and one or more applications of force. The Beaverton Police Department trains officers to use de-escalation tactics, if possible, prior to using reasonable force where the force is necessary to: protect against criminal conduct where there is probable cause to make an arrest, effect an arrest, prevent an escape, or to protect against an imminent threat of bodily injury or death to the officer, another person, or the person against who force is being used. Graham v. Connor [490 U.S. 386 (1989)] is a part of the decision-making process an officer must go through before, during, and after using force.

Below you will find informational charts, graphs, and data from January 1, 2021, through October 31, 2021. Please click on the images to enlarge them. 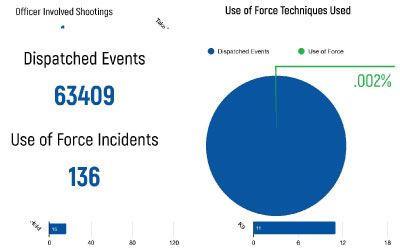 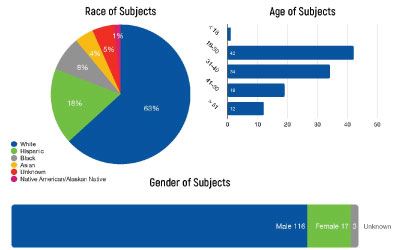 A force incident may involve one or more officers and/or one or more applications of force. Similarly, subjects and officers may experience one of more injuries. Officer involved shooting incidents are subject to a different reporting practice given the external investigation process conducted by WCMCT. For this reason, these incidents are recorded and provided separately from other force incidents.

The chart titled Force Response Necessary provides the reason why an officer used force against a subject. Officers may provide one or more reason per force incident. 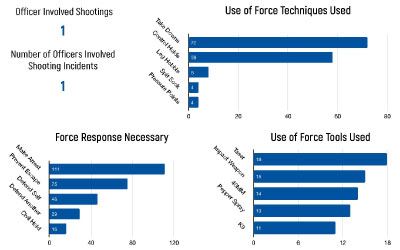 The Injuries Sustained During Arrest column chart provides the total number of injuries experienced by both subjects and officers. Both officers and subjects may have experienced no injuries, one injury, or multiple injuries. In this chart, each injury is counted once per injury category enabling one officer/subject to be represented more than once across all categories.

The Perceived Subject Condition chart provides the frequency of incidents where the subject was reported to be exhibiting a particular condition. One of more subject conditions may be reported in each force incident. Click for larger view. 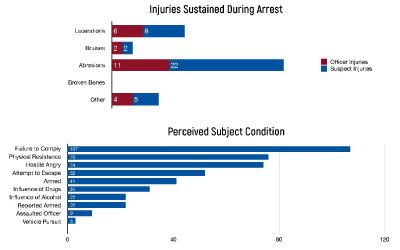